Volunteers from the community came out to plant native plants in the parkway adjacent to the BRECA neighborhood Sunday, 16 March 2014

This event was arranged and organized by Gay Jones, Chair, BRECA Steering Committee.

Others who participated and helped are as follows:
A very big thanks goes to Jeff Peterson and his company SMP Services, Inc.. BRECA also had the strong guidance and cooperation of the Elderberry Farms Native Plant Nursery, Hedgerow Farms Inc. in Winters, “Nextdoor”, the American River Parkway Coalition, the American River Parkway Foundation, the “DRI-Water” Company in Santa Rosa; and, of course, our County Regional Parks. Thanks to everyone! 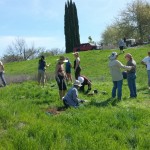 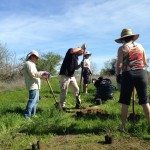 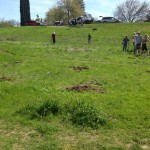 Update for the issues outlined below: As of 2012, the volunteer services of the Gristmill Gathers are no longer needed because County Regional Parks has resumed these duties.

On 28 September 2009, officials from County Parks met with a large gathering of people from the Butterfield, Riviera East, College Greens East, and Rosemont communities and surrounding areas to explain the budgetary problems causing the closure of the Gristmill Entrance along with several other American River Parkway access points. These officials also wanted to discuss possible alternatives for continuing to allow vehicle access at Gristmill that would require community volunteer help to succeed. Sandra Sanders, member of the College Greens Home Owners Association, and Gay Jones, Butterfield-Riviera East Community Association (BRECA) Chairperson, sparked interest in having such a meeting, which was held at the Gristmill Entrance to the Parkway. Attending from County Parks were Janet Baker, County Parks Director, Steve Flannery, Park Ranger Manager, and Shannon Brown, Park Maintenance Superintendent.

People who use the Gristmill access consider it one of their major access points for not only foot traffic but also most importantly for those using vehicles to reach the river to fish and/or launch and remove boats, kayaks, rafts, canoes, or just park and walk. The distance from the entrance to the river makes portage impractical and parking on the street is very limited. Many attending held $100 season passes that monetarily support the parkway. The officials from County Parks were impressed by the number of people showing up to voice support for keeping Gristmill open for vehicle traffic and parkway maintenance.

The county officials provided a briefing on their budgetary problems and decision-making as well as answered questions and took comments. Basically, their problem stems from having their annual budget reduces from over $6 million two years ago to less than $2 million now. County Parks has had to reduce the number of rangers and staff, reduce maintenance, cancel some trash pickups, and remove relief facilities, among other things. This will have to remain in effect until the budget can be rectified in the future.

County Parks then offered a possible alternative for keeping the Gristmill gate open, but that would require some volunteer help from the communities. The park rangers could open the gate in the morning and close it in the evening if volunteers would work to keep the area clean by picking up trash and placing in the trash drums. As necessary, the volunteers would have to empty the drums and dispose of the trash. Many volunteered to do just that, and Gary Morse of Rosemont volunteered to be the coordinator for the effort and to work with the county. You can reach Gary by calling 868-4724 if you would like to add your name to the volunteer list or have questions regarding the effort.

If things remain on track, on Monday, 5 October, County Parks will begin opening the Gristmill gate in the morning and closing it in the evening on a trial basis, and they will also schedule periodic ranger patrols. Additionally, community members are expected to be observant and report aberrant situations. Community groups are also expected to provide the plastic liners for the trash drums and have individual bags for gathering trash. Generally, community members feel this is a successful result and acceptable compromise to keep Gristmill open until sufficient budgetary funds are once again available.